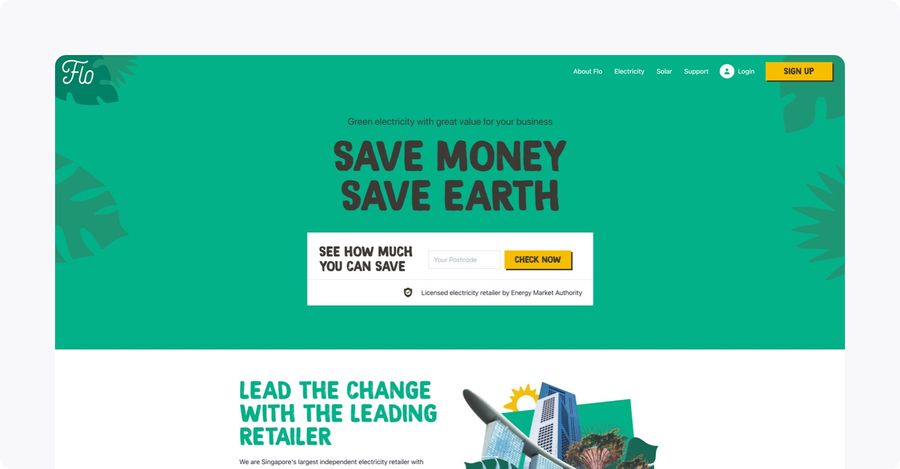 The energy market has been turbulent in recent years, affecting Singapore as well. The unstable situation compelled many electricity retailers to shut down their businesses. This led to frustrations among the customers as they had to deal with wholesale electricity rates that fluctuated considerably throughout the day.

Matthijs & Ernst, the founders of Flo, saw this situation as an opportunity. By providing fixed electricity rates to its customers, Flo can help businesses reduce the risk of price hikes. Alongside Flo’s mission to supply affordable 100% renewable electricity, they knew they were on to something. The challenge was to act quickly in order to hit the market as soon as possible, attract customers, and build a strong brand presence in these uncertain times.

Today, Flo is the largest independent electricity retailer in Singapore and the only retailer that supplies 100% renewable energy at no extra cost to consumers. Since its inception in 2020, Flo has grown its consumer base and released new product offerings, such as solar deployments. With a vision to make sustainable lifestyles more accessible to Singaporeans, Flo is constantly working on new products to expand its renewable energy solutions.

Being a small business, the company knew that it had to prioritize objectives in order to allocate resources quickly and efficiently. Flo needed to be competitive by following the energy rates closely to offer the best possible rates to its customers.

Finding a scalable solution that could handle manual updates based on the daily market rates—which usually took precious development time—meant an easy, hands-off solution that could scale while accommodating Flo’s growing team of twenty, including developers. One of their main needs from the get-go was to make sure developers could invest their time into creating larger product updates rather than pushing content to the site.

In its early days, Flo was looking for an easy-to-integrate and flexible solution to help the team quickly build a scalable website. When deciding on the technology stack, Storyblok was recommended by one of Flo’s developers, who had a great previous experience using the CMS for another project.

One other requirement was the ability to have multiple integrations with the backend system. As a result, the team decided to move forward with the NextJS framework because it provided a better developer experience than other front-end frameworks. Chakra UI, a Microsoft product, is another library used by Flo as the building block for the reusable React components.

Thanks to the chosen technology stack, the company created the website from scratch in less than 4 months, including design, copywriting, and development.

Ensuring Flo’s Website is fast and interactive is also one of the major requirements that Flo’s tech team cares deeply about. That includes the use of CDN networks such as CloudFront and also Storyblok’s Image Service to easily resize and optimize images depending on the client/user’s device. This allows Flo to deliver a swift and responsive user experience, regardless of the device they are using.

One of the primary needs for Flo was the ease of use and intuitive user experience for non-tech team members. Due to market conditions, the team has to generate and update content quickly and autonomously.

With Storyblok, content creators can easily manage content by simply copying or modifying the existing components without asking developers for assistance. There is no need to create new fields each time; instead, they can be just copy-pasted from another page. Meanwhile, the Visual Editor allows previewing any change before actually posting it. This is extremely helpful as marketers can see the content "through the customer's eyes". Or, imagine the situation when the text for a new page does not appear to fit on the page. The live preview helps to indicate such cases instantly and quickly edit the content before it goes live. Overall, the preview feature makes working with content more intuitive.

Setting roles and permissions is another handy feature appreciated by the marketing team. As new people join the company, each person receives different permission levels, ensuring content gets reviewed and approved before it is published. This is also helpful for sales managers who need to manually modify the daily price to provide the best value to clients. This way, Flo can ensure that the rate is approved by portfolio managers.

Meanwhile, Storyblok saves developers time and resources, so they can focus on building features that matter most to the business, while content management responsibilities are delegated to less technical users. Aside from the ability to locally preview any code changes, Flo's engineers love the reusable components since they save time and help maintain the code clean. At the same time, new component development happens quickly. The fastest record to date is 24 hours to create and launch a new component.

Renewable and reusable – how Storyblok helps to build innovative business

With the push from the Singapore government to switch to cleaner energy sources, there is an increased awareness and demand for renewable energy procurement. As a relatively new open electricity market, there is still a need to educate the audience and provide learning content to explain green energy and how to obtain it. Being a truly renewable electricity retailer, Flo has to raise awareness, build trust, and establish credibility.

Aside from the unique product offering and competitive pricing, dynamic content helps Flo attract its target audience's attention. Storyblok enables the marketing team to deliver correct messages at the right time and capitalize on market opportunities. This strategy enabled the company to triple in size in just one year.