Storyblok is the first headless CMS that works for developers & marketers alike.

Hello Devs! Today we are talking about what to expect in 2020 in the JavaScript world. Every year many new frameworks appear and several others are pushed aside because the environment around JS is very vast and full of possibilities. JavaScript is constantly evolving, when just a few years ago we used JS only for small form changes but nowadays companies use JS in the backend and frontend. That's amazing!

This list is based on the popularity of frameworks, usability, and how much these frameworks are gaining momentum. Here are our Top 10!

Vue.js is a progressive javascript framework. Vue.js or just Vue bet on its simplicity and fast learning curve, has faster DOM manipulation than its rivals (Angular and React) and is becoming increasingly popular. Version 3.0 is scheduled for early 2020 so we will keep an eye out as improvements and new features are introduced.

React is probably the most talked about framework in the front end world because it has such a large community. Also because it's brother, React Native, makes it a lot easier when it comes to mobile. It is different from Vue because although the learning curve in React is steep, once you know how to handle the syntax and ways to work with it, you will build exceptional applications.

Angular, currently in verson 8, is a heavyweight front end framework maintained by the giant, Google. Angular is a MVC (Model View Controller) framework which uses TypeScript, which is a different version of JS vanilla or ECMA script. Among it's competitors for enterprise applications, Vue and React, Angular is recommended as it brings us many useful tools and ready-made implementations.

Ember is a framework that aims to help the developer create complex web applications, bringing code and tools ready for it. Ember is not as widely spoken in the community as Vue and React, but it is an excellent framework.

Now that we have gone through the top four Javascript front end frameworks, let's use Google Trends- it's really cool! Google Trends shows us searches on a global level and with a 5 year time curve. Here is the research on these top 4 frameworks in recent years: 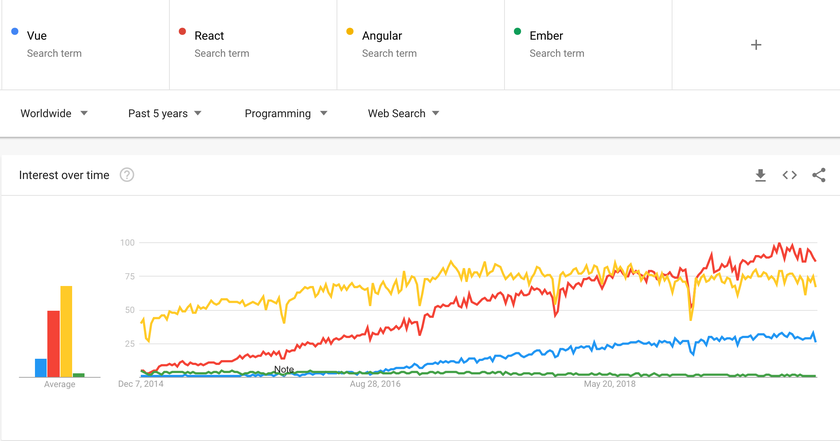 These charts are available here.
The images speak for themselves; we clearly see that Angular dominated the research but React managed to move forward, slowly evolving and passing the giant, Angular. We also see that Vue is growing in world research and that while Ember is behind the other three frameworks it is still a competitor.

Now let's use Stack Overflow statistics. This data is from 2019 but it shows us that React and Vue are really growing and at the top of the polls, while Angular appears well below this graph. Interesting right? Ember unfortunately does not appear on the graph at all. 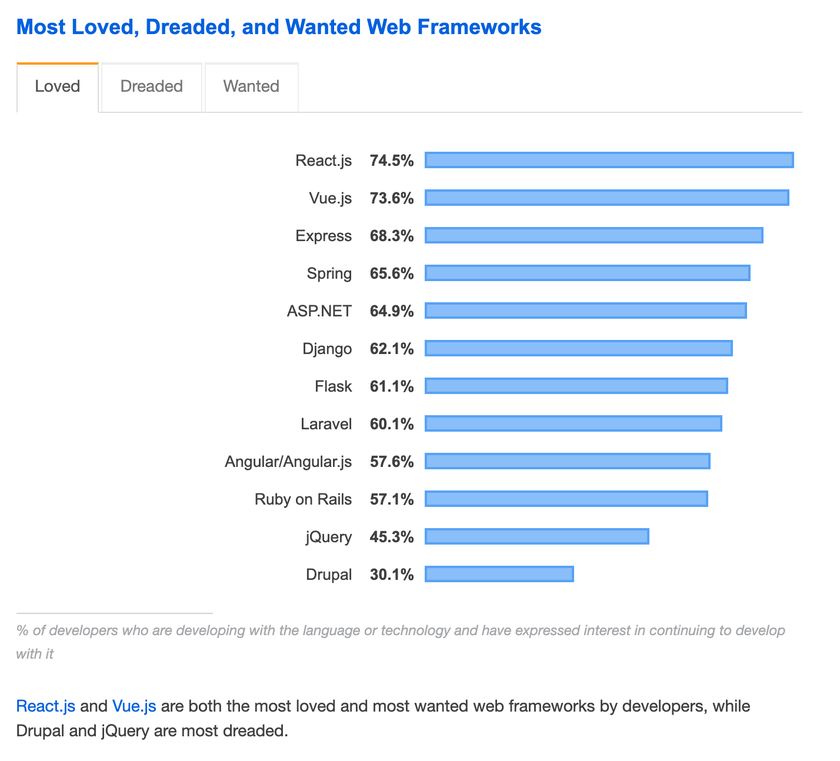 Nuxt.js is a powerful framework based on Vue.js and Node.js with server-side-render. This web application development framework is extremely powerful, but even though it's powerful, it has the same markup as Vue which makes it simple and easy to work with. Also, Nuxt has open source, with over 22k stars in GitHub and it is first for server-side site development for those using Vue.js. 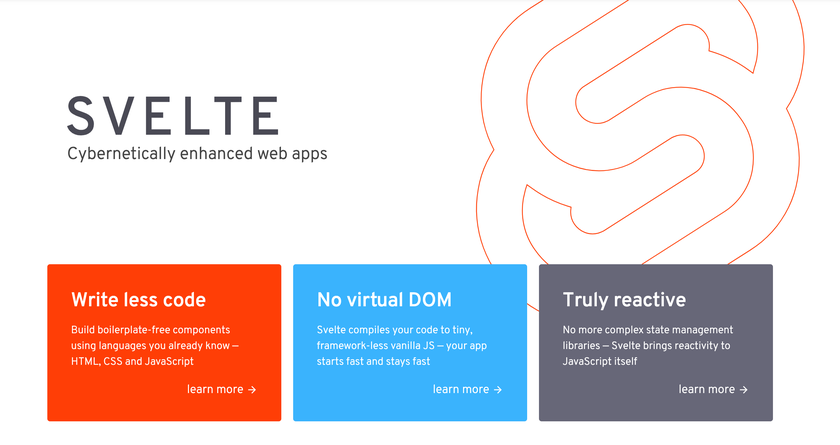 Svelte is an excellent framework that takes a different path than React and Vue. It brings the code facilities that all frameworks bring but when we put our code into production, Svelte compiles the code to pure JavaScript (JS Vanilla) including Third-party libraries and all third-party code. This part of compiling all code for pure JS makes the framework extremely fast.

Backbone, an MVC (Model View Collection) framework for JS code structuring, is widely used in web applications that have a lot of interaction with JS and complex structures. This is great for large Java Script applications.

Gatsby, a framework based on React and GraphQl is a Static Site Generator (SSG). Gatsby uses the best parts of React like React Router and Webpack plus several GraphQl features so you can build your site in React and then generate "Build" static files. This advantages are better performance and great SEO and caching system. Additionally, Gatsby comes with several plugins ready for you to start your project quickly and concisely.

Next.js is similar to Gatsby. Both use React syntax and have transpilation for ES 6 and ES 7 but the biggest difference between it is that Next has SSR (Server Side Renderer) while Gatsby is an SSG. In Gatsby the whole application is generated in static pages and in Next each request is made a new rendering of the page because this part is done by the server.

Before finalizing, let's go to Google Trends once again, but this time let's look at the rest of the frameworks. Note that Nuxt and Next vie for being the most used, remembering that Nuxt is based on Vue and Next on React. The same dispute that we see in the "main" frameworks we also see in its variants. 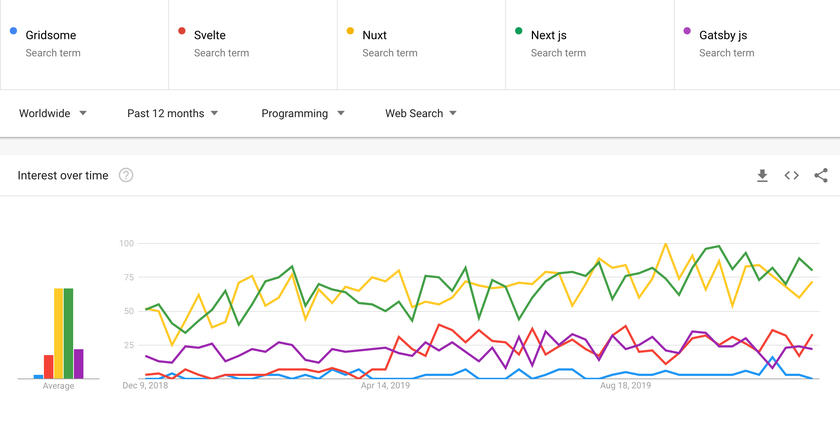 This list is an overview of frameworks not a judgment of the best or the worst. Here at Storyblok we have tutorials for almost all frameworks featured on this list and the ones we don't have we will probably have by 2020 so stay tuned. What did you think of our top 10 for 2020, agree or disagree? Leave it in the comments, we'd love to discuss it.

Working as a front-end developer at Storyblok, passionate about new technologies and the open source community.