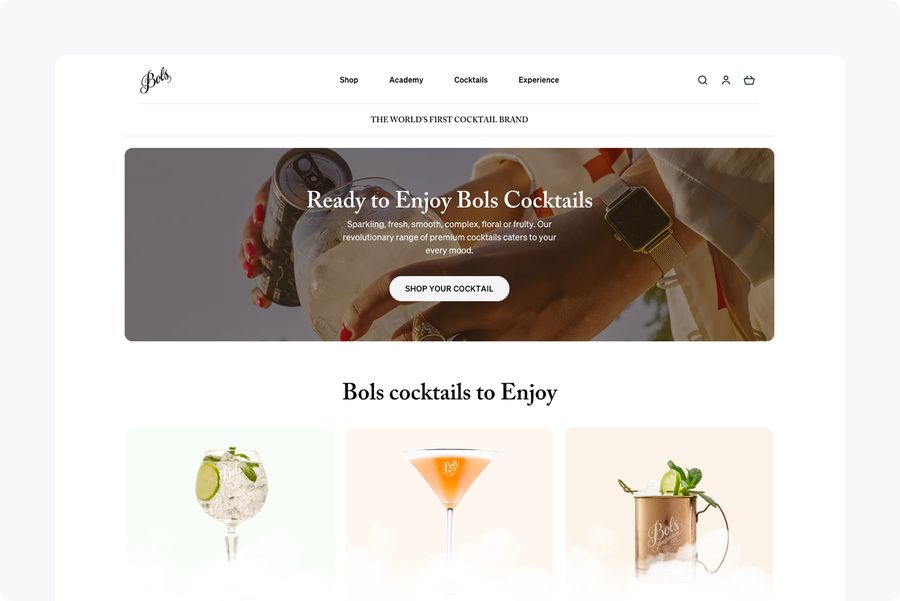 Bols is a Dutch distiller and distributor of alcoholic beverages, including vodkas, gins, liqueurs, and more. Bols was founded by Lucas Bols, where it is the world’s oldest distilled spirit brand, dating back to 1575. The brand distributes to more than 110 countries worldwide, focusing on B2B distribution and selling, and nowadays also directly to consumers through their newly relaunched eCommerce site in the Netherlands and into the United States. The brand works in close collaboration with professional bartenders worldwide to continuously develop new flavors, products and adapt old recipes with today’s cocktail trends.

Story of AMS is a 35+ person digital agency based in Amsterdam, the Netherlands, building and scaling solutions for leading eCommerce brands to new and innovative opportunities.

The origins of Bols and Story of AMS relationship dates a few years back, through the means of collaboration and working together on multiple projects for the brand, whether that was through branding, video content production, sub-brand new websites - the agency had already been heavily involved with Bols in their ecosystem prior to the pandemic. Story of AMS was then also running Bols website with their previous headless setup. While the agency already had switched to a headless CMS setup at that point, it did not fulfill all the tools needed to scale and they were not yet involved with Storyblok’s headless CMS. Consequently as well, they did not use Shopify yet for their eCommerce setup of choice. Ultimately two years ago, Bols came into the position of wanting a new website that could host their desired new eCommerce webshop, bartending academy site, and main product site together. At that point, the brand was heavily B2B focused where albeit having a webshop on their previous site setup, it was geared more towards an ecosystem that was focused on supplying their products to bars, other businesses, airlines such as KLM Royal Dutch Airlines, and additionally their bartending academy site. It was only a few months later, that Story of AMS took up Storyblok as their CMS of choice, and Shopify as their eCommerce platform of choice, coinciding with the right timing as Bols’ pitch came their way.

When the pandemic hit, it changed most of people’s lives and a lot of business models. As bars and restaurants were closed, and Bols had to think fast on their feet to innovate and keep up with the shift in the industry, as all revenue streams previously towards bars, restaurants, and the airline industry halted, towards a more consumer-based approach.

Thus came about Bols' goal in reinventing and selling their products to a direct-to-consumer (D2C) approach, more so, that the brand wanted to be ready if anything like the pandemic were ever to happen again in the future. Another reason for tapping into the B2C market was an insight found that although the brand sold to bars, they don’t exactly know what customers want, whereas compared to D2C, selling through their own eCommerce store, allowed them to get more and deeper insights into their customer’s behaviors and preferences. In that way, the brand could view what their buyers wanted, and control the market and innovate product offerings accordingly to the needs of their customers.

While the brand already had a global presence through selling their products with third-party resellers and suppliers across 110 countries in 6 continents, Bols had their sights set on expansion into the United States as their own entity and capture the market there with their new ready-to-drink cocktail proposition.

Bols was looking for a flexible setup that would allow their marketing and commerce team in both the Netherlands and upcoming in the United States to easily create and manage content accordingly to the different campaigns and product lines, as well wanting speed, SEO capabilities, and autonomy. When Story of AMS talked to Bols’ eCommerce managers, the agency convinced them to move from an all-in-one suite mindset to a Shopify and Storyblok headless CMS migration where they could ultimately collaboratively cherry-pick the best technologies and services for flexibility to fit with their needs to scale globally. Thus began the journey of convincing the brand towards a Shopify Plus and Storyblok duo, from a static side website to a super-dynamic server-side CMS eCommerce system made for the future.

Bols was previously running on a custom solution, where the site was operated on a basic static level, making it difficult to scale and keep up with new markets and audiences the brand wanted to target. Story of AMS consulted the brand to switch to Shopify Plus, using their very own plug in to pull data from Shopify to Storyblok, and with the help of the ‘Shopify Plus Bulk Inviter’, they were able to migrate all Bols’ customer data and invite their existing customers to activate their accounts in the new store. From there, Story of AMS also created a form builder within Storyblok for Bols’ Bartending Academy of which connected from Storyblok and sent data to the appropriate location. Bringing on Shopify Plus also meant an opening to new payment streams, and localization prospects that could handle their Dutch site (being in Dutch and English), and their expansion to the US that would need localization for the local audience in American English.

The overall timeline for this project was created in 2 months, including the interactive design, branding with another agency - Herc, responsive web development of the platform, user experience, and headless CMS Storyblok and Shopify Plus implementation for the brand.

Why Storyblok: Why did Story of AMS choose Storyblok for Bols?

The previous CMS that Bols was using was with an internal headless CMS that Story of AMS had created. Having also gone through other headless CMS options like Prismic and Contentful, Story of AMS found them not up to their expectations, such as the fact Contentful was much more tactically enterprise-driven and Prismic falling short in the overall experience. This caused them to look into other options like Storyblok.

Storyblok’s main unique selling point was the real-time Visual Editor and the overall developer experience that felt right for the agency, which could then be handed over to marketers to independently handle content and campaigns as they go. Moreover, Storyblok’s visual editor is self-explanatory - with just a bit of guidance, developers and marketers can easily set off in creating and orchestrating their content and campaigns in a streamlined manner and in real-time. With a select set of tools armed in hand, Story of AMS is known as the Netherlands and Europe’s eCommerce specialist, delivering to Bols upon their long-term relationship a new eCommerce platform, fit for a global scale.

The overall feedback from Bols was that they were happy with Storyblok’s flexibility towards their content, which allowed them to produce content-rich storytelling on their products where they could not only sell just their products but also sell moments and experiences. This coincided with their direct-to-consumer business strategy where Bols is targeting the ‘urban millennial’ audience with a ready-to-drink cocktail offering. The site here was then designed to focus on storytelling and in the manner of ‘cocktail moments’ that sit as a long-form format of copy, images, and product and recipe suggestions for their go-to-market strategy.

Consequently as well from Storyblok’s dynamic page-building nature, allowed A/B testing to be conducted in order to evaluate and improve Bol’s customer purchasing experience. This could then measure appropriate marketing KPIs such as click-through rates, conversion rates, and so on to push towards an increase in revenue, greater loyalty, and an overall better consumer experience. Because Storyblok allows marketers to single-handedly manage their content and create campaigns in the use of reusable blocks, more time and investment into brand storytelling could take place for Bols marketing team to easily create new landing pages, call to action and optimize their existing content and pages. Such blocks that exist in Storyblok included product sliders, FAQs, text and image components, and more.

From Bols’ website since the launch into the US market ready at hand with Storyblok and Shopify Plus, saw the brand bringing in good organic traffic with high SEO rankings for different keywords and cocktails, and with at least 200 to 300k users a month. The brand has also innovated through the use of offline marketing in printing QR codes on their cans and bottles, to continue their storytelling to their site in a feat of omnichannel marketing, and with their eyes set out to launch their social media presence soon.

At Storyblok, we aim to create the best headless CMS experience for developers, marketers, designers, and content editors alike. While our main goal is to bring the best flexibility and ease of use in distributing your content, we also work closely with our agency partners, like Story of AMS, in championing a streamlined workflow and content setup that their customers can achieve with the help of a headless CMS and other integrations from a best of breed selection. For Bols, taking up Storyblok and a Shopify Plus combination not only aided them in powering their eCommerce expansion to the US with the right localization tools but also gave flexibility and management to Bols’ marketing and commerce teams to fully manage and orchestrate their content as they want their story to be told.