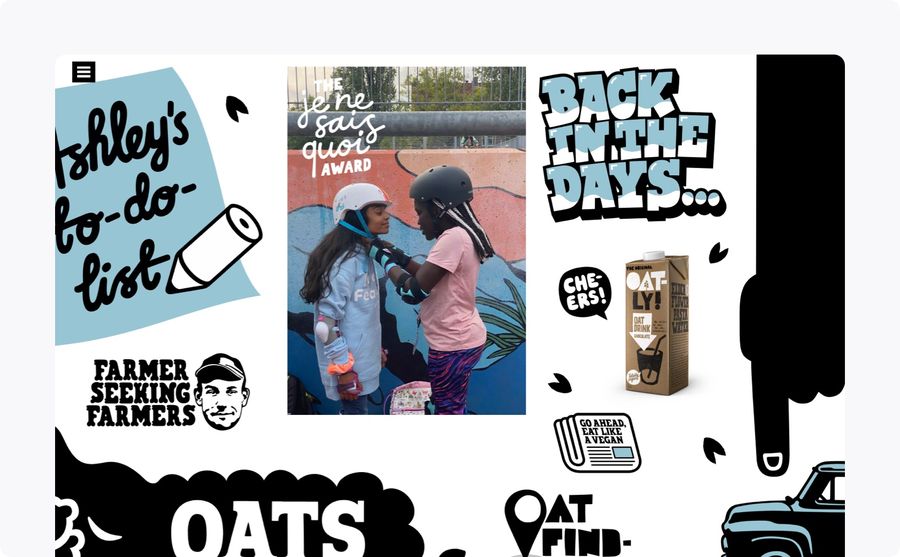 Oatly has taken the plant-based dairy world by storm since its inception in the 1990s as the result of research at Lund University, Sweden, to find a cow's milk substitute for lactose intolerance. Today, it is one of the world’s biggest alternative milk producers worldwide in over 25 countries, selling plant-based dairy products from oats in various iconic product types such as oat milk, ice cream, yogurt, cold coffee, cooking cream, and more.

Around 2012, the brand shifted towards a more lifestyle-led initiative, focusing on sustainability, health, and transparency, embedded within their core values that roots directly inside the company’s own internal processes, culture, and mission.

Within Oatly, there is no marketing department per se, but rather a creative team, dubbed the ‘Oatly Department of Mind Control’ that essentially manages all their projects and processes as ‘creative-first,’ honest, and transparent in their marketing, while being sustainable. With their key markets in Sweden, the United States, and the UK, their primary target audience is just about anyone seeking a dairy-free alternative to their lifestyle to live healthier and more sustainable lives.

Oatly has been around since the 1990s and has had a lot of different CMSs. They created a new website for the rebranding in 2012 with WordPress, however, moved to ApostropheCMS due to their on-page editing tool WYSIWYG. After the rebranding, Oatly started to become a name. Before that, Oatly had a completely different graphic profile. The solution was quite basic in its tech stack through an open-source Node.js framework, yet, it was not a solution that could withstand the future that Oatly was looking forward to in their coming years. The CMS could manage their simple content needs as an editor for a while. However, this was not a global solution prepared for Oatly’s hypergrowth in recent years. Such growth demanded recalibrating their tech infrastructure, multiple languages and regional setups, functionality across cross-team collaboration, bringing on a best-of-breed approach, and could withstand site performance.

To do this, they had to reconsider their digital landscape and technological ecosystem entirely to intersect specific teams working on their separate projects, desired integrations, or technologies with one unified solution. The most essential requirements in the search for a new solution that was repeatedly mentioned came from their developers. This included:

Through an RFP, it was essential that the CMS was a digital fit to Oatly’s digital landscape and ecosystem that could allow them to scale in a sustainable manner. This included specifications into localization, administration, integration possibilities, and economy, though the evidence of various use cases.

Oatly as a company is creatively driven, and thus, needed a higher degree of freedom and flexibility to accommodate to such a need when it came to designing, productivity for their developers, the ease of use between non-technical and technical people, and the ability to easily onboard developers through a tech language they know and non-technical people globally.

In all, Oatly sought a solution that could imminently create a trickle-down effect and foster a culture of collaboration, productivity, and creativity, in a sort of synergy where everyone’s workflow could fit in their optimal headless CMS.

Making the move to Storyblok

After some time comparing and testing other headless solutions, it was because of all the factors mentioned that Oatly chose Storyblok as their headless CMS of choice:

On top of that, Storyblok’s unique visual editor, while containing a folder-type organization structure, allowed Oatly’s employees to “recognize themselves” in the organization of the CMS. Ultimately, Oatly’s developers and marketing/creative team were the main decision-makers, seeking to find a balance between development and creativity. Within Oatly, their creative department is the driver behind Oatly’s website, combing through design, content, and user experience in the frontend. In contrast, their development team covered the backend and security of the overall site. Finding such a synergy and ease of collaboration ultimately ticked the boxes for Oatly’s key decision-makers for Storyblok to become their CMS of choice.

Oatly is still in the middle of its digital transformation, with their sights set on translating more pages and localizing their content assets. Adopting and migrating their content to Storyblok meant easily cloning with reusable content to build and migrate their new site up to speed. On top of that, building and migrating a new site from scratch as a creative team that was initially focused on a lot of Out of Home Marketing made Oatly’s team rethink their digital journey. With Storyblok, they built and organized their content with structure while considering SEO implications and keeping in mind the overall user experience that site visitors would experience.

Currently, at Oatly, the creative team that actively uses Storyblok on a daily basis is made up of two digital designers, a team of editors, and project managers run by Marcus Holmqvist. Whereas on the development side (dubbed their business technology team), there are the key developers and architects in the motion of Oatly’s in-and-outs of their site.

Scalable for a global presence: Oatly’s sights on the future

While Oatly’s team has changed over the years, one thing remains - their hunger for growth and scalability for a global presence, such as exploring possibilities for their eCommerce efforts in their US market website and in localizing catalogs and content per region.

Likewise, the team at Oatly is also in the process of migrating several of their other sites, such as ‘Hey Barista’ into Storyblok. The company works incrementally to bring out an MVP (Minimum Viable Product) while developing through an agile process and with quality. Each site, content piece, and asset at Oatly is a moving process that is constantly evolving, innovating, and keeping up with their core values in the mind of creativity, sustainability, and transparency within their own organization and likewise to their customers.

Storyblok was able to help streamline Oatly’s development flow within their digital transformation while bringing simplicity across their teams of non-developers and developers to create a site that is easy to use, creatively designed, and functional. Their landing pages across every region are image-heavy and rich in animation, yet, have been optimized in loading times using Storyblok’s image service, with video hosting integrations from Vimeo.

At Storyblok, we have always strived to create the best headless experience possible, made for both developers and marketers alike. For Oatly, finding a headless solution that could seamlessly bring their development and creative teams together while equally being scalable in a best-of-breed solution ticked all the boxes. The brand grew continuously and migrated their previous websites in an astounding time frame of just two months while putting out MVPs and reiterating existing content to best fit with their global audience. Storyblok is proud to be a part of Oatly’s digital transformation and growth as they take on the world one oat at a time.