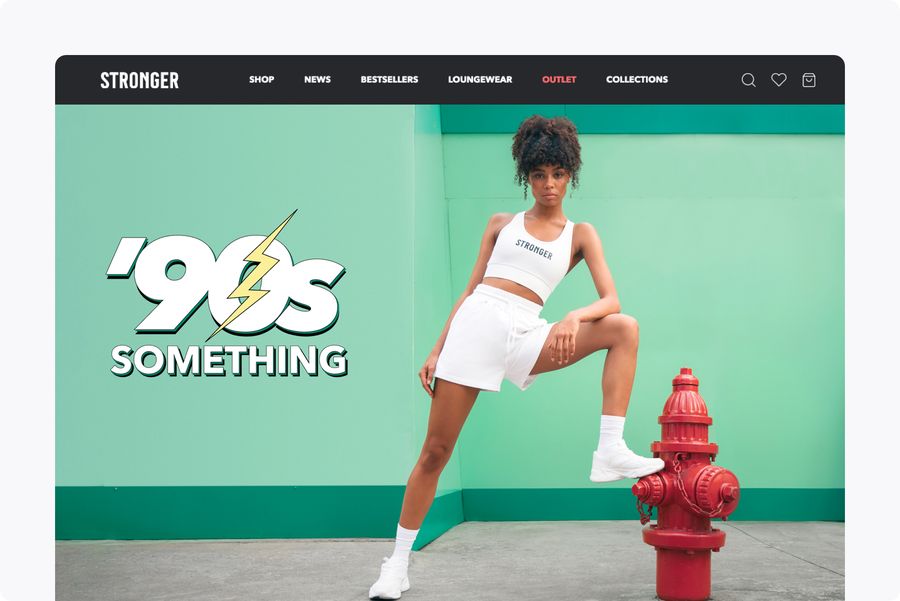 Stronger is a Swedish lifestyle brand made for women. The brand is present worldwide and sells online in over 120 countries, finding inspiration from the natural forces of nature that encompass energy and strength - a tribute in their design and ethos to the women who wear their products to satisfy their needs and all levels of workout.

Made People is an eCommerce agency based out of Stockholm, Sweden, building solutions with their customers’ customers in mind, challenging the status quo in the continuous search for innovative and new opportunities. With over 10 years of experience working with clients from all industries and services worldwide, from high-performing brands to startups, Made People brings together the harmonious link between strategy, insights, design, and technology.

In addition to Storyblok (as their CMS), Stronger also uses a range of state-of-the-art technology to provide a great digital experience.

Stronger came to Made People as a fast-moving fashion brand that was quickly expanding into different markets and languages, with a need to get new content to market quickly. As Stronger was still using their previous platform setup with Magento, they thus needed a reactive solution that could get their content to market rapidly beyond the limit and capacities of their previous platform. As the company wanted to attract a larger audience, Stronger was exploring opportunities to rebrand its brand for the international market while aiming for fast business growth overall.

To achieve that growth, Stronger turned to Made People to help fill in the gaps and aid in the rebranding process as part of their international strategy, which would consolidate all their sites into one uniform domain, becoming more manageable, allowing the breadth and ability to focus on their content to market prominently, while building on a future-proof technology that would allow for that growth to happen.

Previously, Stronger was using Magento and was used to a more monolithic structure. The brand approached Made People, who then showed an entire ecosystem landscape of different services and tools that would allow them to build future-proof experiences. With this, they could tap into with the help of a headless CMS - a more agile and consumer-centric approach in using a CMS that allowed more focus on the content, ease of use across their development and marketing stakeholders, and flexibility to create components that matched the needs of the go-to-market strategy.

What were the factors hindering the business growth and customer experience?

How do you grow from a small company based in Sweden to a globally recognized fashion brand as fast as possible? Stronger turned to Made People for some answers and bringing them on board with a clear outlook:

Stronger needed a more agile and faster website that could also provide more control to their responsible stakeholders, such as their eCommerce Team Leader, Hanny Eldblom, to take control and manage Stronger’s content for an easy go-to-market solution.

Why Storyblok: Why did Made People choose Storyblok for Stronger?

While there were no set technology-centered specifications that Stronger listed, the label wanted anything that could work for 4 to 5 years to future-proof their business, and thus migrate to a stack that could be adapted to the future consumer experience. That’s when Storyblok came into sight - Made People found Storyblok as a solution to easily start projects and pages while growing easily to expand with different content types such as omnichannel-focused or localized-focused. This was perfect for Stronger’s need to grow, focus on content to their customers, and tap into new markets.

On top of that, Made People’s choice of building via Centra, an API-based eCommerce engine, through Storyblok, allowed the flexibility of their own development choice that best fitted the agency, a best of breed solution, and consequently to that of Stronger’s eCommerce needs.

Deciding that there was more than meets the eye, the team at Made People decided to use Centra, knowing it could be applied as an eCommerce engine for prominently B2C products. In it, Centra manages cataloging, inventory, returns, shipments, etc. Hand-in-hand with a CMS, it allows the agency to enrich the product with data from Centra on the back-end, pushing it forwards to the frontend via Storyblok’s CMS in one go.

Storyblok’s Visual Editor allows you to see the content you’re changing in real-time. With custom-build components that fit the specifications and needs of the client, Made People & Stronger were able to move fast. In this case, Made People used custom-built apps to fit with their Storyblok experience, allowing them to reuse components and tools for different projects and campaigns over and over again.

Following Stronger’s need for growth, Made People integrated eCommerce solutions that are funneled through previously custom-built components within Storyblok’s CMS interface that are reusable and can now be applied to any sort of project, campaign, or brand. The following components that were created towards Storyblok and used for Stronger’s example consisted of:

When Made People onboarded Storyblok to Stronger, the initial learning experience between Made People and Stronger’s founders consisted of several demos that showcased how they could manage their content with respect to the design system that Made People had developed for the brand.

Eventually, after demos and approvals, the project went into User Acceptance Testing (UAT). This allowed Stronger to take the reins and play around with content to not only understand how Storyblok and the bespoke design system worked, but also the chance to learn more about the systems, trial real content creation, and relay any feedback in their testing process for final tweaks.

Overall, it was quoted that Stronger liked Storyblok and the setup that Made People had created for them as compared to previous experiences. While currently a lot of the work is done from templates they could use within Storyblok, the brand also recently came back to Made People for the potential to create something new, more creative, and ultimately a new experience for customers.

Within six months from Stronger’s first point of contact, Made People launched the new website just in time for November 2020 to coincide with Black Friday as the new site tested the limits and performance of what was to come. The result was a site that created an impact bringing in higher conversion rates, more orders, a decrease in costs and administration overall, and an extended global presence and support to customers worldwide.

Stronger’s way of work with Storyblok revolves heavily around campaigns and brand storytelling, with around one big campaign each month. For example, the recent summer sale and padel campaign with one of Sweden’s biggest influencers, Margaux Dietz, saw them being able to prepare the campaign page, category page, toast/banner, and the main menu in advance and see the campaign edits before going live in realtime. Stronger’s tremendous growth has resulted in its expansion into 6 to 7 new markets this year and with more coming as they set their sights on further growing within Europe, and tap into new markets like the United States. Such opportunities into new markets also have Stronger’s eyes set on A/B testing with Storyblok’s A/B testing feature that will allow them to trial campaigns with different audience types to measure and learn accordingly.

At Storyblok, we have always strived in creating the best headless experience possible, made for both developers and marketers. In that, we created a system tailored to fit and adapt to the technological needs of developers, and the flexibility of managing content for marketers. For Made People, this was a perfect opportunity to start small and grow continuously with a stack via Storyblok. The ability to construct and reuse agnostically-built components for new projects and campaigns, while being flexible for future adaptation, makes Storyblok Made People’s CMS of choice.

Stronger is a brand that lives to tell its story as it continuously grows. With a CMS like Storyblok, alongside other third-party integrations, has helped Stronger to catapult and propel itself into new markets, new languages, and audiences, and look to the future of trying new features while staying true to their roots and story as a lifestyle brand for all women around the world.