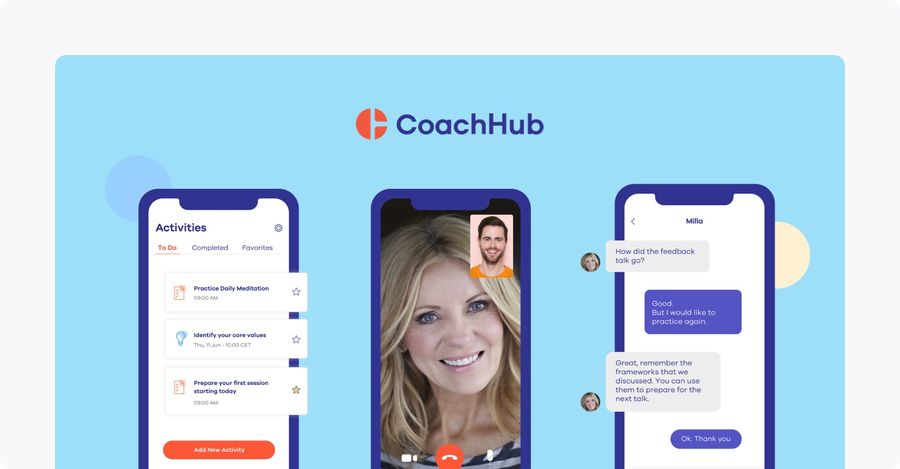 The coaching culture in businesses has grown significantly over the past decade. By doing so, it has improved business transitions and employee experience. Its value to employee experience can be seen through talent appeal and retention, employee reviews and productivity, customer experience, and profitability. Being aware of the benefits coaching can have on a business, entrepreneurs Yannis Niebelschütz and Matti Niebelschütz founded CoachHub in 2018, the leading people development solution that enables organizations to create personalized, measurable and scalable coaching programs for the entire workforce, regardless of department and seniority level. CoachHub has a global pool of 3,500 certified business coaches in 90 countries across six continents, with coaching sessions available in over 60 languages to serve more than 1000 clients and their coachees across all career levels and industries.

In 2022, CoachHub launched their CoachHub Academy, a content library that enables employees to take ownership of their professional development. The Academy offers personalized content in the form of videos, readings, and exercises in 8 languages. The content covers 1000+ original micro activities, which are bundled in 40+ specific learning collections, including Time Management, Emotional Regulation, and Communication. Lastly, it helps take the coachee-coach relationship to the next level with bookmarked content and multimedia activity bundles.

The Academy is managed with Storyblok’s Content Management System (CMS) and our localization technology partner, Lokalise.

Translation has been a cornerstone of communication ever since the first poems and scriptures were written down or chiseled down, depending on how far back you look. From the simplest translations such as converting signs and gestures into words in the olden days to the AI-generated translations accessible to most today, the need to bridge the divide between people has only grown as the number of languages and gestures has also increased a thousandfold over our shared history. The cornerstone of translation changed in 2017 when Nick Ustinov and Petr Antropov founded Lokalise. Armed with the foresight to see that with the world moving towards globalization, the pair realized that globalization requires people from every corner of the world not only to understand each other, but being able to communicate effectively with each other.

Since its creation, Lokalise has become one of the essential pillars of localization and internationalization across the internet. Think of any website you frequent often - if it has options for multiple languages, chances are Lokalise was the platform used for all the translations. Boasting clients such as Mastercard, Starbucks, Hyundai, Revolut and Withings, Lokalise has become the premier translation service for companies and organizations looking to reach wider audiences, or in Lokalise’s words - they ‘help companies go global.’ They are hyper-focused on providing localization management services wherever they can, with close to 60 integrations built across their partnerships. By doing a lot of the heavy lifting with regard to localization, they bring real added value to organizations by allowing their developers to spend their time coding rather than getting involved in copy-pasting translations. Lokalise customers will also notice that they have a world-class customer support system, carefully crafted to serve all their customers' needs in the right way to support growth and upscaling.

The beauty of integrating a CMS and a localization tool

The Storyblok x Lokalise integration was built by Lokalise to help support customers in automating the localization of their content. Prior to this integration being in place, companies that used Storyblok to manage their content were required to build lengthy manual workflows which involved copying and pasting, spreadsheets, and exchanging multiple versions within teams. The Storyblok app enables localization teams to significantly reduce the hours required to translate their content because it can now be completed in a matter of clicks. Customers see a reduction in translation management costs as well as a reduction in the possibility of errors due to manual processes. Customers are also able to localize their content at a much greater scale in an efficient and structured way.

Before deciding to implement Storyblok as the CMS for their Academy and use Lokalise for their translation services, CoachHub was managing all their translations through content managers manually. Naturally, this created quite a bit of friction as manual translation methods led to lots of inconsistencies as there was no glossary to hold the single source of truth for example.

By implementing Lokalise, CoachHub were able to leverage their network of translators as well as Lokalise’s memory database, which essentially remembers previous translations. Therefore, when trying to translate a similar string of words, the memory database will alert the user that an 85% match already exists and offer it as a solution. This cuts down massively on translation time and allows for more translations to be performed at a faster rate. CoachHub also leverages Lokalise’s LSP (Language Service Providers) network for their translations, as well as a team of freelancers, all of whom contribute to CoachHub’s own memory database. The more they translate, the easier the job gets moving forward.

The magic behind the Storyblok x Lokalise integration for CoachHub

CoachHub leverages the Storyblok x Lokalise integration to manage the content in their CoachHub Academy, a content library that enables employees to take ownership of their professional development. Thanks to the integration, the content is delivered in 8 languages: EN, DE, FR, IT, ES, NL, JP, and ZH-CN. The magic behind the process of content localization and delivery is very simple: whenever content is created in CoachHub’s default language, English, those entries get imported to Lokalise. The platform helps do the part of the magic where content is translated and reviewed. Once that part is done, content gets exported to Storyblok. Here, it gets reviewed one last time by the content team and illustrations get adjusted by the design team as needed. And voila, content is then published to the Academy.

A team of content creators, managers and graphic designers work in the CMS. When asked about their favorite Storyblok feature, it came as no surprise that everyone loves the Visual Editor. Graphic designers, in particular, enjoy the fact that they have a real-time preview of the way content and illustrations are going to be displayed.

The Storyblok x Lokalise integration has made a big difference in the way content is created, translated, and published. CoachHub works with agencies and freelancers to translate the content created and published in the Academy. The integration provides CoachHub with an opportunity to manage the process in one tool. Instead of handling the process with single mailings or by using third-party communication tools, the wide team of content creators, agencies, freelancers, and graphic designers can all work together in one space. With the help of the different workflows and real-time discussions within the tool, the team can keep track of the progress of each task.

Before the integration was implemented, the team at CoachHub used to send out all of their default versions, in English, to their translators or have them work directly in the CMS. Since the organization has to manage multimedia content pieces, including articles and exercises containing high word counts and a variety of illustrating images as well as graphs, this process was inconvenient. The setup wasn’t scalable and it was difficult to trace and track. In addition, it was challenging to build sufficient translation memory to maintain their high standard of quality in the long run. With the help of the integration, CoachHub has an optimized way of working and can bring all stakeholders together.

Since the implementation of the integration for the Academy, the team at CoachHub has noticed a great improvement.

The Storyblok x Lokalise integration was built to help support customers to automate the localization of their content. CoachHub leverages the Storyblok x Lokalise integration to manage the content in their CoachHub Academy, a content library that enables employees to take ownership of their professional development. Thanks to the integration, the content is delivered in 8 languages. The biggest benefit of the integration for CoachHub is that it brings all of their stakeholders together and helps them manage the whole process of content creation, translation, and management in one tool.