Retail: Collectibles, digital media, publishing, and distribution How Panini frees its teams and reduces time to market with Storyblok 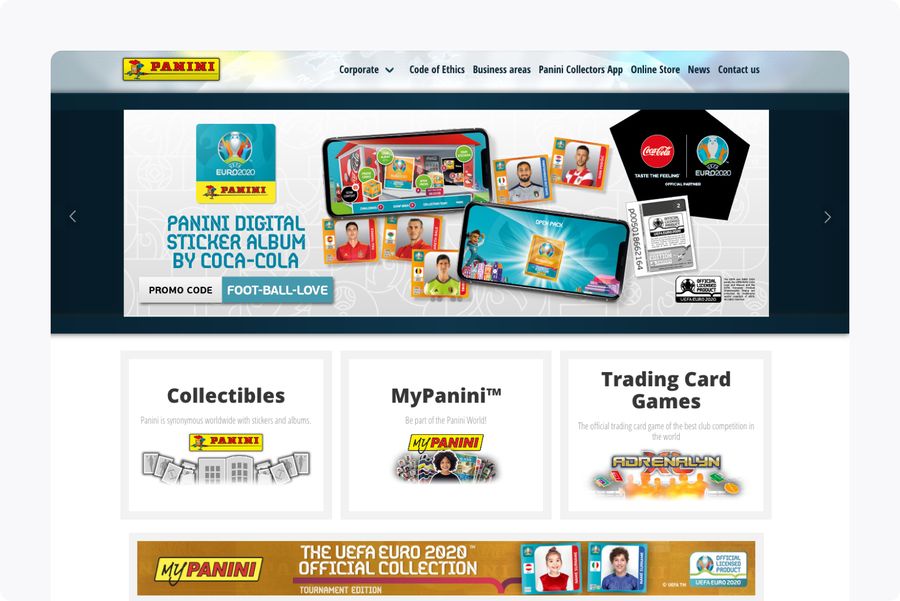 The Panini Group is an Italian company with its headquarters based in Modena, Italy, and subsidiaries based in Europe, the United States, and Latin America. It is known as the world leader and distributor of trading cards, stickers, magazines, books, and comics, as well as other collectible and publishing items, selling across more than 120 countries.

Panini’s origin story starts with their first contact in Storyblok’s early days with our CEO, Dominik Angerer. Panini’s Technical Development Manager - Full-Stack Developer, Nicola Cerchiari, initially did not look that much into solutions, as there was no need to change from their previous CMS at that time. Nicola found Storyblok on a personal search. After initial experimentation and investigation, he thought it would make a nice fit to Panini’s set up and made the move to present to his colleagues the usability that Storyblok has before taking it on as their CMS of choice.

Storyblok was the instrument and catalyst to make the move from a PHP-based infrastructure to a Javascript one. The previous setup included a ‘Kubernetes’-based infrastructure where a basic PHP-based project is usually made up of around three containers per instance, while with Storyblok, everything runs in one container. Therefore, the move to Storyblok reduced the amount of traffic and resources needed. For Panini, this was a significant optimization and resulted in faster performance as fewer technologies were involved. As Storyblok is an easy-to-use CMS that can adapt to your needs, this meant other colleagues would not need to re-learn new technologies and entropies that would build up over time, making it harder to adapt and restrict flexibility. Storyblok enabled Panini to do this in keeping things short and easy.

Life before Storyblok: Why did Panini choose Storyblok as their CMS of choice?

Before Storyblok, Panini was using a traditional PHP-based CMS. However, because of Panini’s requirements and website setup, they discovered over time the limitations of the workflow the previous CMS was giving them. Albeit that it was a good tool, it was not fitted for more complex projects and the complexity of the workflows that would evolve.

Panini works with several projects, which require a CMS built for performance, speed, and usability not just by the developer team but also by editors and marketers alike. Previous projects had to overcome various steps and hurdles before coming to life - from the initial specifications of the project to the moment of it going ‘live’. Such bureaucracy, in a way with the previous CMS, presented specific steps and procedures that had to take place and at the same time could not be done in parallel or reversed.

For example, developers would need to build the framework and customization before the content editors could come in and work with it and update their content accordingly. This costs time, resources, and effort in the long run.

Nicola came across Storyblok in late 2018 - he was personally curious about what was new on the market and CMS world as it shifted to headless. He experimented beforehand before bringing Storyblok internally to Panini. From there, he liked the idea of an endless CMS that could be used as a central starting point for a lot of projects that can be similar or different.

Specifically, in Nicola’s division within web development, several recurring projects support digital campaigns for physical products. For example, every year, there is a new version of the product and therefore a new version of the website that has to be adapted, updated, and published - meaning the nature of their workflow and content production is continuously changing and evolving, adapting to the nature of their products changing each season and year. At most, it is a matter of restyling or adding new features or changes to the structure to adapt continuously. Although the previous CMS gave flexibility in its structure and features, the structure itself was limited based on the way Panini worked and thus made sense to Nicola to make the move to Storyblok as their CMS of choice.

With Storyblok, copy/pasting of content from existing projects to new website projects is much simpler: The team can simply duplicate a Storyblok space, and editors can jump right into their work. This gives full rein to the content editor to start their work and other stakeholder teams to work and collaborate to come together to finalize the project all in one place asynchronously while in parallel. With the previous CMS, that was not possible as you needed an old code-base ready for the new project, and within that old code-base, build the project. This is why Panini chose Storyblok as their CMS to bring to life their daily workflow into what Panini’s sites worldwide are today.

Taking Storyblok on board

Nicola shared his experience and experimentation with his team (including key persons in various areas from content editing, design, development, etc.), where they then did a pilot or smaller project to see the potential of the content management system. They consequently saw it was straightforward as described. They liked the idea that everything was in one place without the need of jumping back and forth between front and back end, project-to-project, risk losing content amongst other pieces of content, and with the ability to share content from one central location to many environments and platforms for the prime omnichannel experience.

Currently, Panini is using Storyblok for only web-based product projects and sites.

Panini uses Storyblok to provide content and support its product websites and corporate websites (Panini Group). Panini Group is considered the most significant piece of content - the site supports Panini’s websites worldwide in different languages and, therefore, locales (with the corporate websites hosted in more than 20 languages/regional versions). Such geolocation capabilities can be seen on one of Panini’s landing pages. While there was no presentation layer/no front-end, it was created as a landing page that they had made, that would then direct the user to their appropriate site depending on where they came from. With all the redirection for this, this was hosted through Storyblok to pull and identify each user to the site that fits their geo-location. For the content editor, this was easy as everything was hosted in one place and could be easily adapted, linked, and directed per user, region and market. Overall, this was easy to implement through Storyblok due to the nature of the front and backend being separated.

How does Panini use Storyblok?

Amongst other projects, they have also been using Storyblok’s automation feature as a means for Panini’s marketing team’s desire to publish content on the weekend, thus providing them by the web development team a way to automatically deploy and publish updates. Content editors also had to make a lot of changes across various sites (for example, one change for twenty versions of the website). The development team thus integrated such automation feature to allow a different version to co-exist for content editors and automate content according to the marketing team for their content publishing schedule.

At Storyblok, we aim to create the best headless CMS experience for developers, marketers, designers, and content editors alike. While our main goal is to bring the best flexibility and ease of use in distributing your content, we also want to foster and champion the streamlined workflow and content setup your enterprise can achieve with the help of a headless CMS. For Panini, bringing Storyblok onboard not only aided in managing several product sites and corporate landing pages across different languages and regions worldwide but also allowed Panini’s team to cross-collaborate with ease, return flexibility to their development, content editing, design, and marketing team to focus on creating and innovating rather than surveilling.

In all, we asked if Panini would redo the whole ‘Storyblok experience’ all over again and if they would change anything? We were happy to hear a resounding ‘no’ and that in fact, they would have made the move to Storyblok beforehand.