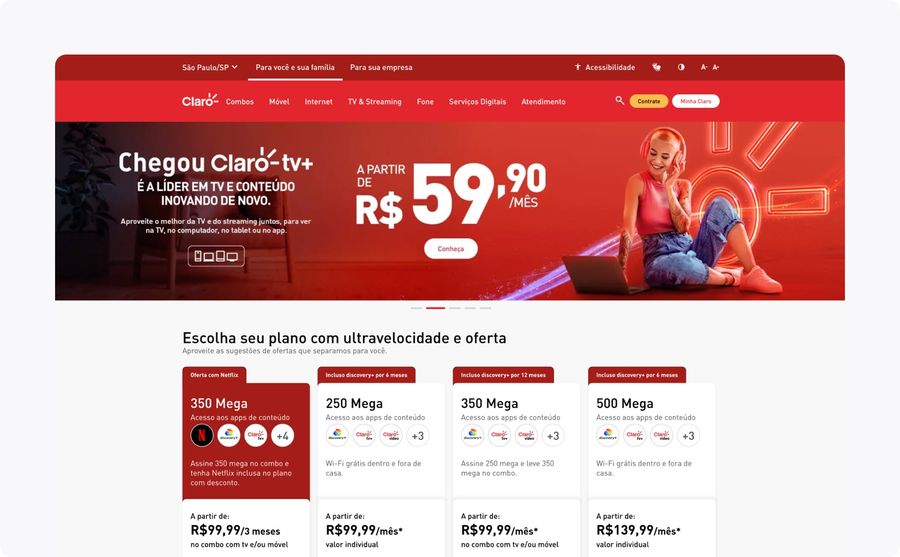 Claro is one of Brazil and South America's biggest broadband and telecommunication companies. Claro Brazil currently has 70 million customers for all products (broadband, television, telephone, etc.), with millions of visits per month to its website, communicating all of its products to their customers.

Claro’s needs to connect with its customers across Brazil

With the first big movement towards digitalization starting in 2012, Claro soon mobilized to migrate its digital platforms to ones that were more modern and intuitive. That being, they built their first websites within a legacy CMS. Over time, the need to personalize experiences, modernize layouts, and integrate (or plugin) with the rest of their tech stack could be seen in more modern platforms allowing unlimited framework possibilities and easy development. The advantage that the business team of developers, content editors, and designers would get from having such a platform where it's a lot easier to iterate and log content into was also evident.

The website team is divided between the development division (supporting and developing Claro’s Storyblok platform) and the content/design operations division. This is led by Adriana Saraiva, Website and DesignOps Manager, who leads these teams. The teams then began to study what was the best-of-breed technology within the market that would meet both their tech and business needs. That was when they came across the headless CMS concept.

In having something headless, the team understood that they could flexibly customize and adapt the system to such a use case. This is possible by connecting content hosted through components via API to their database accordingly per customer profile, compared to a monolithic tied system that would not allow that. Additionally, there was a preference to build the components in the new system with React.

The main goal was to customize their customer’s journey based on data in their interactions on Claro’s website, their location, their purchasing behavior, and plans, and thus provide the right offers and packages to them from there. This works with MarTech technologies such as Salesforce’s Interaction Studio, which Claro uses integrated with Storyblok, to optimize and personalize their customer’s experiences.

The benefits Claro's team identified from this change:

Keeping in mind all those elements of needing change to optimize their customer’s experiences, Claro took a step towards their search for a headless CMS that could handle the challenges and needs they wanted.

Claro’s journey towards a headless CMS in their research came into play with their tech lead, looking into different developer and technology blogs, Discord, Gartner, and G2, to investigate what was on the headless market and what first-hand users such as the developer community, were saying about each specific platform. They finally reached out to us, and Storyblok’s fast response to Claro’s call to action for a demo and PoC was the turning point in concreting the support as a CMS we would give to Claro. On top of that, having a part of Storyblok’s own development team based in Brazil aided in supporting Claro’s needs and questions in Portuguese and with a familiar face nearby.

Through 6 to 7 different use cases that were built, which the development and business team participated, Storyblok stood out because of its usability and flexibility. Amongst the development team, the easiness of developing and integrating with the React Design System components was a definite plus, whereas the business team found a faster, more flexible, and more intuitive registering system.

Overall, it took Claro 6 months from the start of Claro’s search to the already-built 7 different use cases from the end of 2019 till the beginning of 2020. However, Claro’s ability to migrate to Storyblok was halted with the pandemic, a difficult time where all new investment projects were halted in 2020. In 2021, the project was restarted, and Claro decided to migrate to Storyblok. At this time, Claro could hit the ground running as they had already developed the base components in React and prepared the front-end once the green light was given towards Storyblok. In all, Claro was able to migrate in just 3 months across four websites, beOn, Claro Empresas, Embratel, and Claro.

Simplifying the adoption curve for all users

Today, Adriana’s website team, alongside the communications team/content marketing team and an external agency, are the key users using Storyblok on a daily basis, with over 500 pages to manage. When it came to learning to use Storyblok, all teams were onboarded in a training session with Claro’s development team, accompanied by videos and documentation to support the adoption to Storyblok. In all, it only took Claro’s communications, design operations team, and the external agency just 2 to 3 weeks to be fully onboarded to start using Storyblok.

Some key criteria that the team looked out for within Claro’s websites were in regards to the difference in page loading times (reducing loading times) and Apex tests (showing the number of code errors).

In the future, Claro’s website team has their sights set on proposing and introducing Storyblok to their other teams in implementing Storyblok with their eCommerce storefront, mobile applications, and customer dashboard, Mi Claro. On top of that, Storyblok is excited to hear the possibility of our system being proposed to Claro’s subsidiaries from Argentina, Chile, Peru, Mexico, Colombia, and more.

Storyblok was able to bring new horizons to Claro through a headless experience in the time of need to personalize their customer’s experience and journey through content. Keeping in mind Claro’s motto, Um Claro para Um, meaning, One Claro for each One, resonates with the need for a platform that has given more agility in the development and integrations of personalized content with each customer’s region and in future countries, in relation to Claro’s database towards their customer’s experience.

It is incredible to see Claro's transformation from a monolithic legacy system to an agile headless CMS that allows them to connect with their audience and customers across Brazil. With Embratel’s B2B branch and Claro’s innovation hub, beOn, Claro seeks to share and inspire Claro’s own business clients in the future, towards a headless and agile system, with Storyblok.