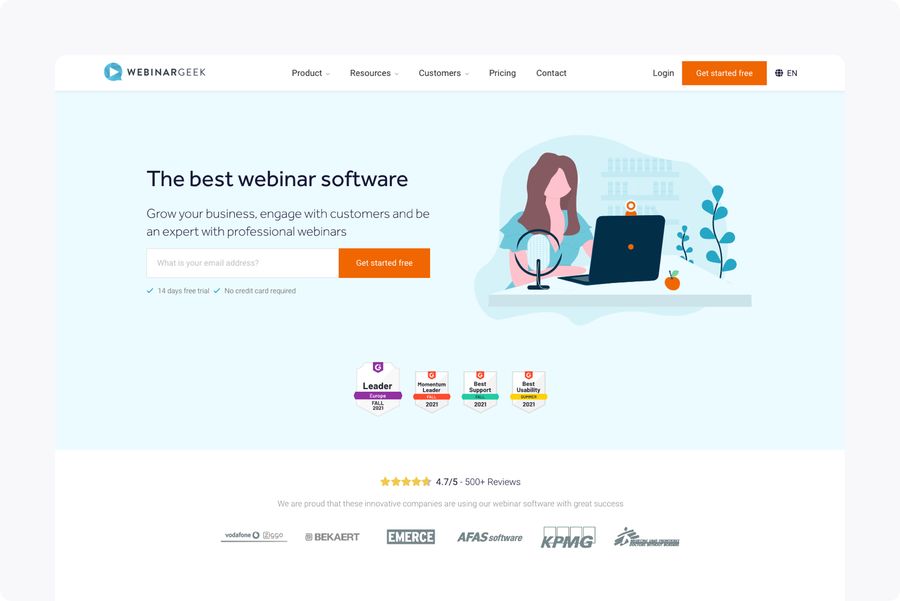 WebinarGeek is a webinar SaaS company that appeals to clients of all sizes. The typical customer is a company with over 50 employees. This scales up to include enterprise-level clients like universities, governments, and hospitals. However, it also scales down so that even individual yoga instructors can use the program’s power.

As the world began to feel the impact of the pandemic, more and more organizations needed web conferencing: in one 2020 study, an astounding 99% of respondents listed webinars as ‘critical’ to their marketing plans. With demand surging, WebinarGeek decided that it was time to rethink the CMS that they had been using since 2015.

Storyblok checked in with WebinarGeek’s Head of Marketing, Bryan van Anrooij, giving us some insight into the process of finding, choosing, and leveraging the power of Storyblok.

The future came fast. Unfortunately, that meant that their technology, like a traditional CMS, became outdated just as quickly. WebinarGeek had been using the same legacy system since its inception in 2015: a Gatsby framework, a Bold CMS, and a Webflow template. As such, it had started to become a restraint on its growth rather than support for it:

While drafting the content in a separate program could occasionally avoid the editing issues, it became another step and tool that they needed just to get their CMS to work. They wanted a platform that would allow content creation without the need for workarounds – a single tool that could do it all.

The collaboration problem was also a significant roadblock. As a company with sites in four different languages, it wasn’t uncommon for editors to need concurrent access. Without it working properly, executing a cohesive, internationalized marketing strategy was extremely difficult.

At the end of the day, WebinarGeek’s legacy system simply couldn’t provide the seamless performance they needed to make the most of their potential. The editing experience was lackluster, their reach was inhibited, and their marketing was suffering.

The search for a new system

As WebinarGeek began browsing the CMS marketplace, they briefly considered WordPress. Ultimately, they decided this was also a system at risk of becoming obsolete within a year or two. This led to the developers prioritizing headless systems for a longer-term, more advanced approach.

Headless systems are often referred to as "future-proof”. This is because they make use of APIs, thus giving developers the freedom to decide what technology they want to use. They can pick the framework that they’re most comfortable with and switch it up later. They can also choose whatever integrations they want, making for a flexible system that can keep up with the latest advancements.

With this priority in mind, the WebinarGeek team set its sights on a headless candidate. It started with their developers, where they began consulting reviews and comments from other professionals.

They came across several potential options, but none that fit their exact needs. For example, one system offered a slightly longer-term lifespan than WordPress – say, 3 years rather than 2. However, this was still not quite the timeline they were looking for.

Another option offered the powerful localization that they were looking for. Unfortunately, it came in the form of a separate plugin. This brought in the risks of relying on a third-party program that could cease being updated and secured as it wasn’t a part of the main platform.

Eventually, their search for an agile CMS brought them to Storyblok. As a cutting-edge headless system, it offered the flexibility they needed while also providing the integrated features that they needed. After the developers, marketers, and executives saw the full package, they decided that Storyblok was the best option for WebinarGeek’s next phase.

Storyblok was recently voted as the highest-rated enterprise-grade headless CMS worldwide on G2. Check out how we can support your business today!

Along with the new CMS, WebinarGeek also decided to bring on a new developer. They found one that specialized in Gatsby. Thanks to Storyblok’s frontend-framework-agnostic system, they were free to implement it without any issue.

With the original site still functioning, they began the duplication process. This gave them the opportunity to correct consistency issues that had popped up over the years: without a component approach like Storyblok’s, there had been a lot of room for error. This led to variation between elements that were supposedly identical.

After they had successfully completed the copying process, it was time for the moment of truth: going live. Fortunately, it was as seamless as it could be. No errors, no 404 messages, and no crashes. WebinarGeek was simply able to change over to an improved system without any issue.

Storyblok is now the engine for WebinarGeek’s website. They find that it makes creating new pages easier than ever. Without unnecessary roadblocks, they can do away with the dedicated tool that they had used just to create their landing pages. As a result, there’s one less program to deal with, leading to:

They also get the benefit of having more resources to invest in other projects. However, this increased efficiency doesn’t mean that performance went down. WebinarGeek has reaped these benefits without negatively affecting their speed scores. In fact, switching to Storyblok increased them by a full 50 points.

The internal staff also finds that creating site content is a lot easier. Developers don’t have to redo their work over and over again. Instead, they can just reuse the nestable components to quickly get the exact results they’re looking for. This makes for less work and a more consistent experience for front-end users. As such, it contributes to more polished, professional branding.

By the same token, the marketing team also saw improvements to their workflow. They no longer need to reach out to developers every time they want to create a new page. They can simply use the components available to them. This means that both teams can now work independently while resting assured that consistency and quality won’t suffer.

Storyblok’s internationalization features. Field and folder level translations meant that adapting content to different markets was simple. The ease of use associated with components carried over to internationalization: when they needed to copy and paste these, the translations went right along with it. This meant that a multi-language project enjoyed the same streamlined editing that a single-language one did.

As technology continues to evolve, companies like WebinarGeek will need the freedom to do the same. That’s where Storyblok comes in. By leveraging internationalization, speed, and teamwork benefits, WebinarGeek can now compete more effectively and reach more customers than ever before.

Ready to see what Storyblok can do for your organization? Contact our sales team today for more information!