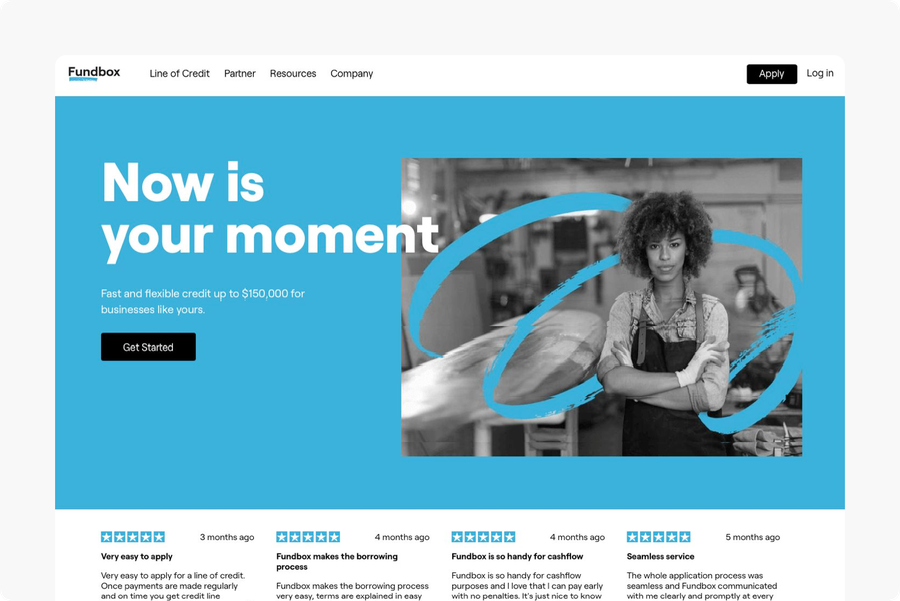 Fundbox is a financial platform for small businesses that offer fast and easy access to business credit. Since its founding in 2013, Fundbox has connected with nearly 300,000 small businesses in the U.S.

Fundbox migrated their website on top of Jamstack and chose Storyblok as their CMS after a pretty long research phase. The process took them 1/3 of the time compared to their previous experience, while solving their content management issues.

In 2019, Fundbox began a rebranding process, including a full website redesign. As the website relaunch was mostly design-driven, the team didn’t initially focus much on the back-end technology. Together with an external agency, the team relaunched Fundbox in September 2019 after 4.5 months of work.

While the project accomplished the design aspect and provided a new front-end, the team soon realized they were stuck with a home-grown back-end CMS that didn’t feel like a big improvement, especially given the recent spend. The Django-based CMS wasn’t user-friendly for marketing, and it wasn’t state of the art for engineering, leaving both teams dissatisfied. The lack of seamless collaboration between and within teams was becoming a serious issue. Not long after the initial relaunch of the website, it was time to search for a better CMS solution…

Alex Volkov, Marketing Solutions Architect at Fundbox, was certain that moving to Jamstack was the way to modernize their websites and deliver great performance. His challenge was convincing a team of marketers who didn’t know much about Jamstack that it was the best solution, especially given the results of the previous project. In other words, Alex had to prove why moving to jamstack and a headless CMS was worth the migration. Alex began a journey of helping key stakeholders understand the concept behind “headless” and Jamstack, and focused on the following business benefits to convince the skeptics:

Once everyone agreed on the benefits of Jamstack, it was time to actually settle on a future-proof CMS.

The team’s experience in 2019 had led them to be especially cautious of their next step. They set out to find a flawless option by outlining some key requirements:

Following these criteria, Alex and the team made a shortlist of possible candidates, which eventually led to them choosing Storyblok.

The result: Doing more in ⅓ of the time

After making the decision to go with Storyblok (with Nuxt.js and hosted by Netlify), Alex and the team got to work. Fundbox converted all of the website components to vue, migrated the data to storyblok schema and went live within 5 weeks.

As Alex put it: "Compared to last time, the switch to Storyblok took 1/3 of the time with a fraction of the costs."

The workflow issue was fixed immediately. Developers loved the hassle-free back-end experience and the component approach, while marketers loved the visual editor and the seamless content workflows.

Implementing Jamstack allowed the Fundbox team to build new sites in record-time, leading them to think about other web projects, including internal websites.

For marketers, the new workflows were essential, especially when compared to the previous collaboration issues. Additionally, Storyblok’s unique visual editor sealed the deal: